2019-09-30T15:40:29-05:00By Bridgepointe A Life Celebrated|
Goldie and Stanley Carnes celebrated their 74thwedding anniversary surrounded by family and friends at Ashford Court in Westland, where they’ve lived for the past year.  The Homestead staff and Life Enrichment team decided to pull out all the stops to give them a party to remember.  As many as 20 family members came from near and far.  There was cake, balloons and dancing.  Entertainment was supplied by “Family Affair,” a church group band of musicians, all over 70 years old. 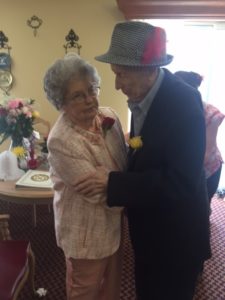 Goldie and Stanley were married on April 25, 1942.  They met when Stanley was a taxi driver and Goldie stepped into his cab for a ride.  As they say, the rest is history. They were married in their home in Kentucky in a small ceremony that was officiated by Goldie’s uncle who happened to be a judge.  She was 17 years old and he was 19.  Together they have seven children, 13 grandchildren and 16 great grandchildren.  They lived in Taylor, Michigan most of their lives.

Goldie remains involved with the activities and fundraising projects at Ashford Court.

Congratulations to Goldie and Stanley on their 74th anniversary! 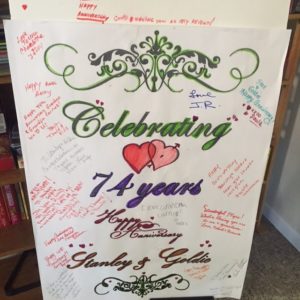